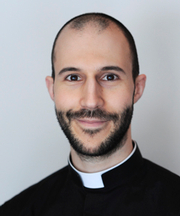 ROME, 4 October 2012 – On Thursday, 4 October 2012, 33 seminarians of the Pontifical North American College were ordained to the transitional diaconate during a celebration of the Eucharist at St. Peter’s Basilica.  David M. Tedesche of the Diocese of Rochester was among those ordained.

His Excellency, The Most Reverend John J. Myers, Archbishop of Newark and a 1967 alumnus of the Pontifical North American College, celebrated the Mass and was the ordaining prelate.

In his homily, Archbishop Myers referred to St. Francis of Assisi who was also ordained to the diaconate. Addressing the newly ordained, and all those gathered for the event, His Excellency remarked, “we need only remember St. Francis of Assisi whose feast day is today. His life helped the Word to come alive in people’s hearts and minds and lives. One of his admonitions to his Friars is timeless and appropriate for each of us today: ‘Preach the Gospel at all times, and when necessary, use words.’”

During the ordination, the new deacons promised to live a life of prayer, celibacy and obedience to their diocesan bishop.  The new deacons will have an additional year of theological studies and spiritual formation before being ordained to the priesthood.

As part of the ordination rite, the Archbishop placed the Book of the Gospels in the hands of each candidate being ordained and said, “Receive the Gospel of Christ, whose herald you have become.  Believe what you read, teach what you believe, and practice what you teach.”

Archbishop Myers concluded his homily by addressing the new deacons, saying, “we depend on the handing on of a living faith, a living tradition joined to Jesus in His loving sacrifice… for He has chosen us, He has chosen you, my brothers, to be His friends and to bear fruit that will remain.”

The Pontifical North American College serves as the American seminary in Rome.  Founded in 1859 by Blessed Pius IX, the college has formed over 5000 priests near the heart of the Church for service in dioceses around the United States, Canada, and Australia.  The College strengthens the bonds between Rome and local Churches worldwide, and it allows its students to study the Church’s rich religious and cultural heritage at close range.

Deacon Tedesche is scheduled to be ordained a priest of the Diocese of Rochester in June 2013. David is originally from St. Mary’s Parish in Ontario, New York. He earned his undergraduate degree in English and a M.A. in philosophy from SUNY Albany. Says David, “My journey to the priesthood thus far has been an incredible adventure in which I have discovered ever more deeply and fully the goodness and greatness of God. I can’t wait to be a priest and to bring the hope and goodness and love of God to others back home in the Diocese of Rochester.”

Information from Rome courtesy of the Pontifical North American College