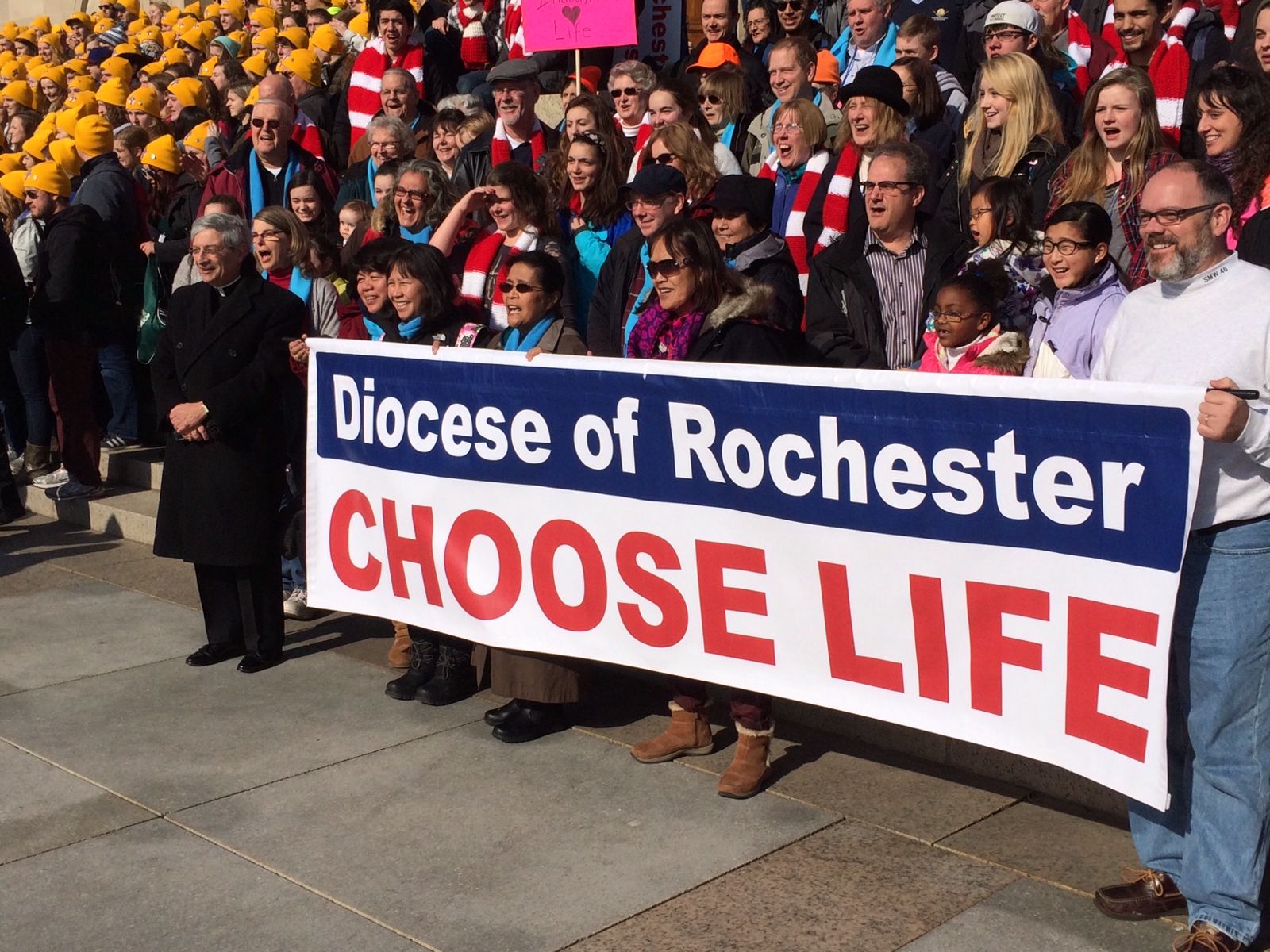 More than 400 Diocese of Rochester parishioners joined Bishop of Rochester Salvatore R. Matano and thousands of women, men and children from across the nation in Washington, D.C. Thursday for the January 22, 2015, March for Life, held annually on the anniversary of the U.S. Supreme Court Roe vs Wade decision which legalized abortion in the United States.

Leaving Wednesday evening on buses from various parishes throughout the 12-county Diocese as well as personal vehicles, the pilgrims joined Bishop Matano at a 10 a.m. Mass at the Basilica of the Immaculate Conception in the nation’s capital, where The Most Reverend Charles J. Chaput, Archbishop of Philadelphia, was the principal celebrant and homilist.

Following Mass, the national March for Life began on the National Mall and concluded at the United States Supreme Court.  The Diocese of Rochester marchers included about 200 youth, who also attended a special March for Life youth rally at the Verizon Center in Washington.

“It’s thrilling that hundreds of parishioners from the Diocese of Rochester are making the effort to go to Washington and March for Life,” said Suzanne Stack, diocesan coordinator for Life Issues. “For those of us taking the bus, it’s a challenging 24 hour pilgrimage, but worth the sacrifice to be a witness to the value of all human life, born and unborn.”

Stack continued, “The 200 youth from the Diocese of Rochester are joining thousands from all over the United States. This is truly the pro-life generation. They have grown up with legal abortion all their lives and know the damage it does to mothers, fathers, family members, friends, to say nothing of the millions of lives lost.  These youth care about all human life and want to add their presence and voices to defend the right to life of every person, no matter how small.”

One bus, from Rochester’s inner-city church Holy Apostles, was comprised of youth from the parish’s neighborhood, St. Frances Xavier Cabrini parish in Rochester and from St. Michael’s Woodshop. Father Tony Mugavero is leading the youth on a three-day pilgrimage with a Consistent Life Ethic emphasis.  The trip will include several videos with themes of non-violence and protection of all human life from conception to natural death.  Besides the Youth Rally, Mass, and March for Life, they will visit the national Holocaust Museum and other sites in Washington. The trip was made possible by the generous sponsorship of priests, deacons, area parishes, individual Catholics, and funds from the Consistent Life Ethic Grant, sponsored by Life Issues of Catholic Charities of the Diocese of Rochester.

Stack said Bishop Matano’s presence with the marchers is “inspiring to all. We diocesan pilgrims appreciate his leadership in calling for the protection of the unborn, who are most vulnerable and without a voice.”

During his homily at a special Mass for Life this past Sunday at Sacred Heart Cathedral in Rochester, Bishop Matano said, “The threats to human life from the moment of conception until natural death, increased violence, escalating wars, and abuses against persons for selfish, immoral purposes, all these inhumane acts have created a culture of death unworthy of our children. How shall our children remember us? What values are we instilling in them? How much of God’s law is the law they follow?…If we want to be a society which has the affirmation and protection of human rights as its primary objective and boast, then we must reverence the most basic right – the right to life in all its stages.”