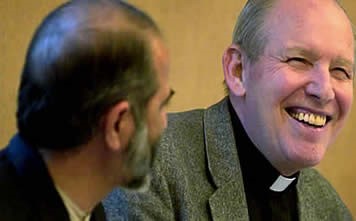 The Agreement of Mutual Understanding and Cooperation is believed to be the first agreement of its kind in the world. Signed by Bishop Matthew H. Clark, other diocesan officials and representatives of the Greater Rochester Council of Masajids on May 5, 2003, the Agreement affirms rights of free speech, thought, conscience and religion; rejects religious and ethnic intolerance; promotes and encourages a deeper knowledge of and respect for the history, traditions and sensitivities of the two faiths; and promotes collaboration to serve the needy in the Rochester community.

At the gathering, speakers addressed the topic of “Muslim Catholic Dialogue: Opportunities and Challenges.” Guest speakers were Imam Hassan Qazwini of the Islamic Center of America in Dearborn, Michigan, and Bishop Francis Reiss, auxiliary bishop of the Roman Catholic Archdiocese of Detroit.

The Diocese of Rochester also signed what is believed to be the first formal accord between a Roman Catholic Diocese and Jewish community leaders. The Rochester Agreement was signed in May 1996 by Bishop Clark, the Jewish Community Federationand Rochester Board of Rabbis. That agreement, like the accord with the Muslim community, has led to many joint programs and activities to promote stronger interfaith relations.

For more information about the Diocese of Rochester’s ecumenical and interreligious activities, click here.