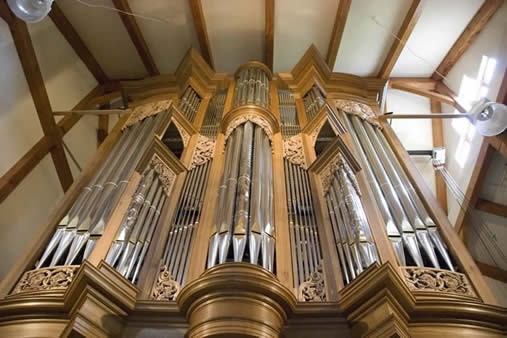 Sacred Heart Cathedral’s long-awaited world-class pipe organ will arrive this Sunday (June 8, 2008) — in a host of boxes and a moving van. More than 50 parish volunteers will help unload boxes and pipes under the watchful eye of renowned organ builder Paul Fritts of Washington state. The organ will be assembled over the next few weeks, tuned all summer and debut in a special dedication ceremony and concert on Friday, September 12, 2008 at 7:30 p.m..

Unloading and moving the organ elements into the Cathedral will begin at approximately 12:30-12:45 p.m. Sunday, June 8, 2008, at Sacred Heart Cathedral, 296 Flower City Park (between Dewey and Lake avenues).

— The organ, funded through gifts from donors, is arriving from Paul Fritts Organ Builders in Tacoma, WA. It was crafted over the last two years, beginning in Spring 2006.

— The largest pipes are more than 30 feet high, the smallest about the length of a pencil.

— Everything but the screws that hold the organ together are made in Paul Fritts’ shop. Each of the 3,890 pipes was cast by Fritts and his team of artisans. It was fully assembled and now has been taken apart piece by piece to be shipped in a Mayflower moving van.

— Reassembly will take up to two weeks, after which “voicing” must take place. Fritts and two assistants will painstakingly adjust each pipe for air flow, by ear, which results in a pipe’s specific tone and volume. As voicing progresses, more and more elements of the organ will be played during Masses and at weddings, funerals and other ceremonies.

— The polished oak organ case is a work of art itself and contains a number of religious symbols, including a statue of St. Cecilia, patroness of music, as well as the Old Testament figure of Miriam playing on an ancient timbrel.

— Fritts’ organs are located throughout Washington and the rest of the country, including at Vassar College, University of Notre Dame, Stanford U. Memorial Chapel, St. Joseph’s Cathedral in Columbus and Princeton Theological Seminary.

— Father John Mulligan, pastor of the Cathedral, says, “We selected Paul Fritts as the builder of our instrument because he has the reputation for consistently building organs of the highest quality and because his organs are truly liturgical ones, which invite congregational singing.”

— The Cathedral staff has worked very closely with the Eastman School of Music on the organ project.