Edison Tayag to be ordained 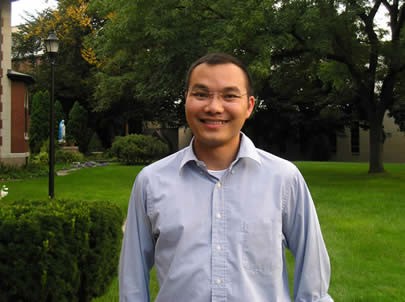 Edison M. Tayag will be ordained as a priest of the Diocese of Rochester on Saturday, June 28, 2008. His ordination Mass will be held at 10:30 a.m. at Sacred Heart Cathedral, 296 Flower City Park, Rochester. All are welcome.

Bishop Matthew H. Clark will preside at the Mass, which also will be attended by many of the diocese’s priests and deacons.

Tayag, who is 34, was ordained as a transitional deacon in June 2007. He has completed his final year of major seminary at the Pontifical North American College in Rome, Italy. He was born in the Philippines and raised with his two sisters and brother by parents Eduardo, a woodworker, and mother Ofelia, an elementary school teacher.

After ordination, Tayag will be assigned for the summer to Our Lady of the Lakes in Penn Yan, before returning to Rome this fall to complete his studies.

Before becoming a seminarian, Tayag, an avid hiker and kayaker, was a physical therapist for almost 10 years, working in Manila, the Philippines; Florida; Connecticut; Brooklyn; Brockport and Montour Falls, N.Y.

“In 2001, I took part in a diocesan retreat for young men interested in the ministerial priesthood called “Twenty-four Hours with the Lord,” Tayag says. “At the time, I was a parishioner of St. Vincent de Paul in Churchville. I continued my discernment while a parishioner of St. Mary of the Lake in Watkins Glen. In 2002, I moved in to Becket Hall and started taking courses in philosophy and religious studies at St. John Fisher College, in preparation for seminary.”

“Summer pastoral assignments have brought me to a Central-American Immersion Program in El Salvador, a parish in the Philippines, and to Our Mother of Sorrows Parish in the town of Greece.”

Tayag says his road to the priesthood has been one in which he has found love and support from the community of believers. “With such overwhelming encouragement and prayerful support, I definitely and honestly can say that I am not responding to God’s call simply on my own, but that an entire community of faith affirmatively responds with me to God’s call,” he recently told the diocese’s Catholic Courier newspaper.