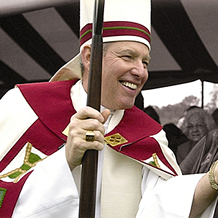 Then-Father Matthew Clark is ordained a Bishop by Pope John Paul II in May 1979 at St. Peter’s Basilica, the Vatican 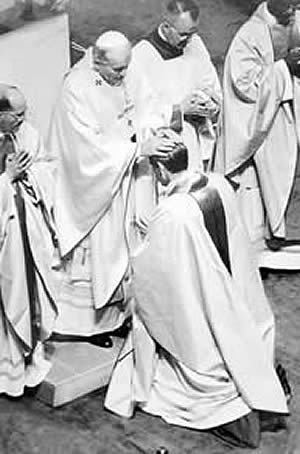 Bishop Matthew H. Clark’s coat of arms was devised shortly before his ordination as a bishop. The symbols on it relate both to the Diocese of Rochester and to his own life. The left side of the shield bears the diocesan Cross of St. Andrew with a crescent in the center. The diocesan shield was designed in the 1930s by Pierre LaRose. The St. Andrew’s Cross was taken from the coat of arms of the original Diocese of Rochester in England. LaRose distinguished the new design from the original, however, by changing a scallop shell in the center to the crescent symbol of the Immaculate Conception.

In addition, the figure emphasizes the bishop as the successor to the apostles, and the bishop’s charge to preach and live the Word of God faithfully and to witness to the Resurrection. The banner beneath the coat of arms bears the motto, “God’s Love Endures Forever.”

The hat with the tassels indicates that the shield is that of a bishop. 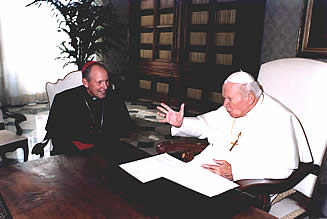 On the right side the cross of Pope John Paul II is displayed, indicating Bishop Clark’s respect for him as a man and for his office. In the upper left of this side a crescent again appears, signifying the Immaculate Conception, the pure disciple of God’s Work, the Patroness of the United States, of the Diocese of Albany, of the North American College and of the chapel at St. Bernard’s Seminary.
The name Matthew has been carried by three generations of the Clark family: Bishop Clark, his father and grandfather. The winged figure which appears in the lower right corner represents St. Matthew, apostle. 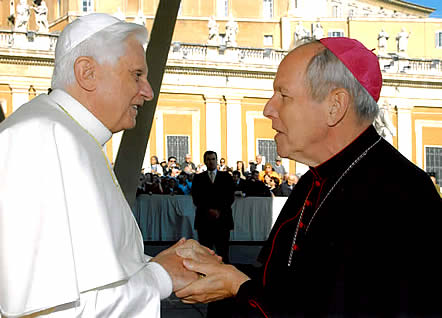